No Summer Solstice in Rome 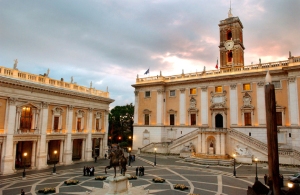 The Campidoglio – seat of the Municipality of Rome

I was looking forward to celebrating the night of the Summer Solstice, but discovered there’s no such thing in Rome. Or Italy for that matter. Or rather, it’s not celebrated, and besides, it actually happens here a few minutes after midnight, on June 21st.

I stand by my traditions, so as far as I’m concerned, it’s tonight as in northern climes. I’d decided to celebrate somehow, and I’ve lined up a series of lovely candles to light up around the house tonight. Bonfires are illegal, so going out to one of the city’s lovely parks this evening wouldn’t have solved anything.

The solstice is reminiscent of what was probably my most entrancing trip ever, up to a remote house on a remote cliff in Norway that a cousin had rented for the period. We were the only foreigners for miles around, and when I did my break-of-dawn Tai Chi in the garden surrounded by strawberry farms, the farmer gawking while driving his tractor in the neighbouring field ran it into a tree. We had lovely adventures up and down the coast and visiting a number of islands, including having a school of dolphins greeting us  and breaking the monotony of waiting for an evening ferry we weren’t even sure would ever turn up at the deserted dock. That particular sunset was a multicoloured carnival of lights and true to form my camera ran out of film. Pre-digital of course, so the wonder of it all only lives on in our memories. Back in Rome I panicked for some time on waking up at night in pitch dark, darkness that had never happened during my Nordic adventures. There, there was the beige glow of the star-dotted sky outside the window for hours around midnight, and a sun that never quite set.

Objectively, here in these southern climes, there’s not all that much to celebrate today, as summer solstice only underlines the fact we do have sun, a lot of it, and can probably expect a couple of months’ more of the same, including a few weeks of suffocating humid heat. What’s to celebrate?

This year Romans decided to celebrate the pagan rites – but differently, by voting in a brand new Mayor. A woman and youngest mayor ever, the candidate of a grassroots movement or party or whatever it calls itself. Obviously, with Italy’s reputation for being a bit of (?) a male-dominated culture, the foreign media couldn’t get enough of her in the last few weeks. Her party was created by an ex-comedian turned aggressive politician, and reports of his in-house autocratic top-down management style have been all over the press. The movement claims it stands for Change, with a capital C, so they were voted in by people fed up with the corrupt and inefficient status quo, though many Romans don’t really seem to know what they’ve ushered in. Local culture tends to be pretty change-resistant, so maybe the only way for Romans to move ahead was to go off the deep end.

Top of Madam Mayor’s program is transparency for a scandal-ridden town, but there’s already a question of her having allegedly denied at one point having worked as a lawyer for another municipal agency and/or of having declared the work belatedly. Her nay-sayers claim her contract was renewed with the assistance of a person connected to her party. Plus ça change…

But one really nice thing did happen this my solstice-day morning. To upend any notion that macho Italian males are kitchen averse, one of the members of a team I’m working with these days brought us all the most delicious chocolate muffins he made himself.  The meeting was predictably a particularly pleasant one. Apparently he enjoys baking for his kids as a hobby, and decided to treat us all today. He must have caught the solstice vibes!

Astronomically, tonight will also be a Strawberry Moon night, and the last really dual event was almost 70 years ago. So lighting my festive pagan candles tonight is a must …

Do you celebrate solstices in any way?

19 Responses to No Summer Solstice in Rome