Football and Fado in Rome

Last week I connected to the Portuguese side of my ancestry. When there are major international competitions I have back-up choices. Italy is one of the temples of football (=soccer) and I dutifully did my bit of “tifo” for my host country, but local interest in the European Championship petered out when their team didn’t make it beyond the quarter-finals. So I cheered myself hoarse for Portugal – the ugly duckling underdog team that wasn’t expected to go anywhere –  in front of TV in the final. It was pretty much of a plod, but they ended up taking the cup home – their first international win ever.

I loved the idea of the 10 million inhabitants of the small country having their little moment of happiness, specially as the national character doesn’t usually give in to excessive exuberance. Indeed, traditional Fado music is meant to define the Portuguese soul and it’s often melancholy and sad.

Later in the week, I’d been invited to a late evening concert billed as Fado, on the beautiful grounds of an ancient villa, and went with the expectation of mainly slow and wrenching notes.  The setting was gorgeous, a small audience on chairs on the manicured lawn, and the tall surrounding trees partially lit with soft reddish light. The evening was cool after days of almost unbearable humid heat, and the singer, accompanied by a viola, a classic guitar and a bass guitar was a refreshing surprise too. Living in Italy accustoms one to the cult of the past in all its forms – whether art, opera or cuisine – , all traditions carved in ancient stone (literally), but the Portuguese seem to have a more pragmatic attitude towards the past, they blend their roots with the present and move ahead into the future with apparent ease. 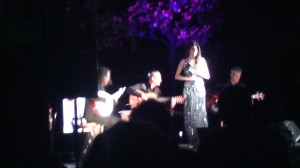 The lovely singer did indeed look modern, and to my untrained ear, her music didn’t seem to be pure Fado, with many songs in a more popular vein. Yet her relaxed poise and movements had the elegance of the past. The rapt mixed audience of all ages joined in clapping where the rhythm called for it, and we managed to convince the artists to do an encore.

After years of trying to feel the language to speak it better – it’s one of my weakest ones –  I understood for the first time what my Portuguese relatives had always claimed. I finally caught the beauty of its clipped sounds, the purrs and staccato that her singing was setting off just as well, if not better, than the drawn-out lazy sounds of Brazilian Portuguese.

All the while, the world at large and all the horrific events of the past week were very much on my mental radar. I’ve walked down the Promenade des Anglais many a time. But to respond to all the insanity, we just have to stay at the helm and carry on with our lives to the best of our abilities and responsibilities.

And finally, an update on Rome itself: our only real immediate local problem is garbage disposal services gone awry, and frankly, as problems go, we’re really very lucky.

How are you dealing with normalcy in your lives?

18 Responses to Football and Fado in Rome